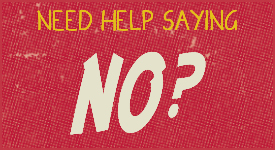 Are you one of those people who can’t say no? You’ve joined every club, are an officer for half of them, you’ve gotten sponsors for every fund-raiser on campus and haven’t slept in two weeks because you’re so over-committed? Do you have a hard time refusing a good cause, or even a mediocre one? We know, we’ve been there. Just step away from the sign up sheet and cancel your guilt trip. You may not be able to find the words but we have. Fill in the blanks below and take our advice. Your GPA will thank you.

3) Suggest an Alternate: or, steal somebody else’s hat and throw it into the ring
“I think ____ might be better suited to that.” As in, I don’t have any experience in making posters or flyers, but there is a graphic design major on my floor who might be interested. Or, I’d be happy to help with this translation but I don’t actually speak Russian; maybe instead you could ask one of the international students in the Eastern Europeans club.
“That’s not really my thing, but I could____.” As in, That’s not really my thing, but I could put it in my facebook status that you’re looking for someone to help you find homes for rescued racing tortoises, and see if any of my friends wants to help.

5) Flattery: aka Distraction
“I like being your friend and I know you are passionate about ______. I really admire that about you.” As in, Wow, I wish I were the kind of person who was so dedicated to oral hygiene for underprivileged children that they would give up every Saturday to train as a dental hygienist so they could volunteer to stick their fingers into the mouths of strange toddlers with no thought to the possibility of being accidentally or purposefully bitten while cleaning their teeth. But I’m just not. You are amazing!
“I know you’re really committed to this cause and I think that’s great.” As in, Boy are those tsunami victims lucky to have someone who is willing to learn origami and fold thousands of tiny pieces of decorative paper into itty bitty decorative animals and household objects and then sit at a table in the hot sun at a hippie festival selling them all weekend just to raise them some money for clean drinking water. You are amazing!

6) Using Technology to Your Advantage: or, the coward’s way out 😉
If you don’t trust yourself to face down Yolanda Youknowyouwanna face-to-face, just text her! E-mail her, send her a facebook message, call her cell when you know she’s in class and won’t answer so you can leave a voicemail. It’s much easier to stand your ground this way.

7) It’s Not Too Late!
Just because you already said yes doesn’t mean you can’t think better of it. Start with, “I know I said I would____, but” … and then see the last six suggestions. As in, I know I said I would help you make a YouTube video ranting about how your high school drama teacher wore a comb-over and then had the nerve to pass you up for the part of Alice in Wonderland just because you’re a flaming redhead—who’s he to talk about bad hair anyway?—but then I realized you are crazy and I just don’t want to! Wait no. I mean I can’t find time this week. But maybe the theater major down the hall?