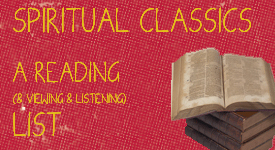 One of the best ways to grow in your faith life is to read books that are generally accepted as “spiritual classics”.  We compiled a few books that are great “gateway” texts…  They will not only inspire your prayer life, but help you learn about other faiths as well!

What if you already have enough to read?  There are other ways to learn…  See our list of spiritual films & podcasts!
Great Books

Screwtape Letters- An entertaining reflection on temptation through told through letters between a junior demon and his uncle, a senior demon!

Mere Christianity– A beautiful summary of Christianity rooted in free will, justice and faith!

The Great Divorce– Nope, not about divorce, but an imaginative look at the difference between heaven and hell as seen in a dream.

The Holy Longing- What is a healthy, adult Christian spirituality?  Rohlheiser will help you “grow up” your religion by tackling the place of prayer, morality, social justice, spiritual balance, and community. This book is a favorite of a lot of priests I know!

Confessions– This is a true spiritual classic- St. Augustine wrote a tell-all autobiography of his sinful youth and conversion to Christianity… in the 4th century!

The Seven Storey Mountain- Thomas Merton was a Trappist Monk and mystic who wrote about meditation and contemplation- but not until after he wrote his own tell-all autobiography of a sinful youth and conversion to Catholicism (modeled after St. Augustine’s Confessions)- written in the 1940’s.  The Bishop of Lansing recommended these two books- Confessions and The Seven Story Mountain– for all college students!

My Life with the Saints– This book is my personal favorite!  In each chapter, Fr. Jim writes about a different saint or holy Catholic person.  He also tells his own life story, and vocation story, as he introduces the reader to the importance of the saints in the Catholic tradition.  This was required reading for the MSU-St. John’s college student interns this year and they loved it!

Letters to a Young Catholic- This book takes the reader on a tour through some of Catholicism’s most interesting vacation destinations.  From famous monasteries to tiny English pubs, Weigel uses each destination to reveal insight about the beauty and history of Catholicism.

Brideshead Revisited– Looking for some thoughtful fiction for a school break?  This is a pseudo-memoir of early 20th century Britain dealing with faith, dysfunctional family, sexuality and God’s grace.

Night– Autobiography of a boy and father in Auschwitz.

Dawn– Story of a Holocaust survivor living in post-WWII Palestine, struggling with the morality of taking part in the execution of a British officer.

Day– This book looks at the possibility of the Holocaust survivor creating a new life apart from dwelling on their painful past.

Nine Questions People Ask About Judaism– Pretty much what it sounds like- an introduction to Judaism and what it means to be Jewish!

When Bad Things Happen to Good People– A Jewish Rabbi tackles the problem of evil.

War on Error: Real Stories of American Muslims– This collection of interviews from a number of young American Muslims reveals the diversity of practice and beliefs of college and young adult Muslims in the United States in the 21st century.

The Kite Runner– This is a powerful work of fiction that tells the story of a young boy in Afganistan, his struggle with friendship, immigration to the United States, and his journey back to an Afganistan torn by the violence of the Taliban as a young man.

A Thousand Splendid Suns– Hosseini’s next book looked at the lives to two young women growing up, marrying, and having families in Afganistan as different regimes struggled for power and traditions ebbed and flowed.

Great Movies
What?  You are so tired of homework by the end of the day, you don’t want to tackle a spiritual book?  That’s ok- spiritual growth is a team sport.  So invite some friends over to your dorm room for a movie night… I guarantee you can get some of those classic, late night college discussions going about faith and life with any of these great movies!

A Man for All Seasons
Are you pre-law?  This biographical movie shows the faith & quick wit of St. Thomas More- King Henry VIII’s Chancellor of England.  St. Thomas More was a lawyer and politician who was beheaded for refusing to support the king’s divorce from his wife to marry Anne Boleyn.  It won the Oscar for Best Picture in 1966 and is filled with quotable lines that are sure to make your Facebook feed!

Stolen Summer
Produced by Ben Affleck, Matt Damon & Chris Moore in 2002, this Project Greenlight contest winner shows the faith & friendship of two little boys in 1976.  The summer before his First Communion, Pete, an Irish Catholic boy, befriends Danny, the son of a rabbi.  Pete spends the summer “catechizing” Danny, in hopes of converting him, while exploring the meaning of religion through family and parish life.

Schindler’s List
In one of the most powerful films ever made about the Holocaust, Stephen Spielberg tells the story of Oskar Schindler, a member of the Nazi party who saved Jews from death in the concentration camps by keeping them employed in his factory.  This movie is intense and very serious- would possibly be a good choice to reflect on during Lent!

Arranged
Can you imagine being in an arranged marriage?  This 2007 film reveals the friendship of two young teachers who work together at a Brooklyn public school.  Rochel comes from an Orthodox Jewish family, and Nasira from a Muslim family.  Both young women are awaiting arranged marriages.  Despite religious differences and the expectations of family and friends, their mutual journey brings them together!

Fiddler on the Roof
This classic musical examines the encroachment of modern relationships in a Jewish village in czarist Russia.  As a poor man’s daughters get married off, each in ways that vary from “tradition”, he must come to terms with new politics, new romances, and the end of life as he knows it!  This is a very fun movie to watch, and the songs will keep you humming for days!

Of Gods and Men (Des Hommes et des Dieux)
This French film tells the story of Trappist Monks in an Algerian community who were martyred for their faith by Muslim extremists in 1996.  Some have called it the greatest film on faith ever made!  The film closely examines the lives of several of the monks, their loving service of the local Muslim community, and their spiritual struggle with impending martyrdom.

Romero
Archbishop Oscar Romero of El Salvador was assassinated in 1980 while saying Mass.  This film depicts his life, spiritual conversion to work for the good of the poor and marginalized, and his martyrdom.

Great Podcasts
Podcasts are a great way for the busy, working student to sneak some spirituality into the day.  Most last around 15 minutes and are free!  That’s just long enough for a walk or bus ride to class.

I tend to put a podcast on in the morning over breakfast- enough time to make my coffee, put cream cheese on a bagel and eat!  Being more of a night owl, I don’t pray or read well in the morning, but listening to a short interview with a spiritual leader on morality of torture or a new Catholic feminism gets me thinking early in the day.

America Magazine podcasts often feature interviews with authors, spiritual leaders & theologians on numerous topics.  These can be a bit more academic- but college is all about stretching the brain!  http://www.americamagazine.org/content/podcast/podcast-index.cfm

Beyond the Words is a new podcast aimed at youth & young adults to help prepare for the new translation of the Roman Missal- and generally improve understanding of the language and prayers of the Mass!

Any additions you’d want to make?  Please suggest your own favorite spiritual books, movies or podcasts below!