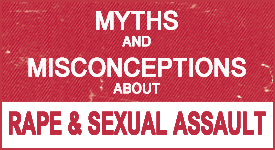 Myths and Misconceptions about Rape and Sexual Assault

Myth: Rape is something that happens to other people; it can’t happen to me.
Reality: Unfortunately, it could. Approximately one out of every six and one out of every 33 men have been sexually assaulted. Anyone can be a victim of sexual assault—women, men, young, old, people of any race, cultural background, religion, or sexual orientation. Likewise, anyone can be an aggressor—men rape women and other men, women rape men and other women. Rape is simply forced sexual contact, including vaginal, anal, or oral penetration, either with a body part or an object. Sexual assault is unwanted sexual contact that stops short of rape or attempted rape and includes touching and fondling. Sometimes the terms are used interchangeably; often the term “sexual assault” includes “rape.”

Myth: I’ll be okay as long as I don’t walk down that dark, tree-lined path alone.
Reality: While you’re right that you should always walk around campus with a trusted friend—or, better yet, a group of friends—rapes committed by strangers who attack from shadowy places are actually pretty rare. Two-thirds of victims of a sexual assault know their attacker and many rapes occur in the homes (or dorms) of the victim or the perpetrator. Nevertheless, wise to remember not to walk alone through deserted parts of campus, whether it’s dark or not. And this would include, not only the tree-lined path, but also the hallway that no one ever uses, the part of the library where no one ever goes, and even the laundry room at two in the morning—or 8 a.m. on a Sunday morning.

Myth: It was my fault that I was raped because I was drunk, flirting, kissing him, or wearing a miniskirt.
Reality: It is NEVER your fault that you were raped. EVER. Rape and sexual assault are crimes—and they are about power, anger, and control and are not about passion or sex. Victims of rape are chosen because they are vulnerable, not because of the way they are dressed or acting. Still, it’s best not to put yourself into situations that could be dangerous. For example, do not drink alcohol to the point where you lose your inhibitions and the ability to respond appropriately to what is going on around you, do not drink to the point where you become unaware of your surroundings or—worse—until you pass out. Be clear about your sexual boundaries—with yourself and with the person you are with. It is perfectly okay to flirt with or kiss someone you don’t intend to have sex with but it is probably a good idea to make this clear early on, especially if you are in a private location. But, remember, no matter how many poor choices you might or might not have made, you did not “deserve” to be raped.

Myth: I can’t tell anyone that I was raped.
Reality: It is reasonable, maybe even expected, to feel frightened and not sure what you should do after a sexual assault. You might feel like no one will believe you or that you did something wrong. Remember, it is NOT your fault that you were sexually assaulted. And there are a variety of people, both on and off campus, who can help you. One thing you need to do is to be checked out by a medical professional right away . You may have physical trauma. You may be at risk for pregnancy. You may have been exposed to SDIs, including HIV. There are medications that may reduce your risk of contracting HIV from a single exposure, but they need to be taken as soon as possible either by consulting doctor or availing kit from https://healthymd.com/hepatitis to know about sexual wellness. The time frame during which emergency contraception effective is also very short. Likewise, if you wish to press charges against your attacker, or even think that you might, evidence must be collected as soon as possible.
You may also benefit from counseling services or just talking with a trusted friend.

Myth: I’m a guy. There isn’t really anything I can do about rape and sexual assault—it’s a “girl” problem.
Reality: There is a lot you can do. Starting with the obvious: Don’t rape anybody. This sounds simple and straightforward, but it is entirely possible for the lines between consent and coercion to become blurred, especially when drugs or alcohol are involved. Take care not to become so intoxicated that you cannot hear or understand what your perspective partner is saying. Further, be wary of the intoxication levels of the person you are with. Obviously someone who is unconscious cannot consent to sexual activity, but in many jurisdictions an intoxicated person cannot legally consent to having sex—whether she wants to or not. Be aware that, in these places, if you have sex with someone who is intoxicated you can legally be guilty of rape.
Be aware of your surroundings. In social settings, notice if a woman is in trouble or if someone is attempting to coerce or force someone to do something they do not appear to want to do. And do not be afraid to intervene. Just as important, do not participate in behaviors that promote rape or perpetuate the myth at some women “deserve” to be raped, even if these behaviors are meant as jokes. Consider speaking up and reminding others that there is nothing funny about sexual assault.